In this work, we will focus on the “at the same time” or direct transcription approach which allow a simultaneous method for the dynamic optimization problem. In particular, we formulate the dynamic optimization model with orthogonal collocation methods. These methods can also be regarded as a special class of implicit Runge–Kutta (IRK) methods. We apply the concepts and properties of IRK methods to the differential equations directly. With locating potential break points appropriately, this approach can model large-scale optimization formulations with the property of maintaining accurate state and control profiles. We mainly follows Biegler's work. 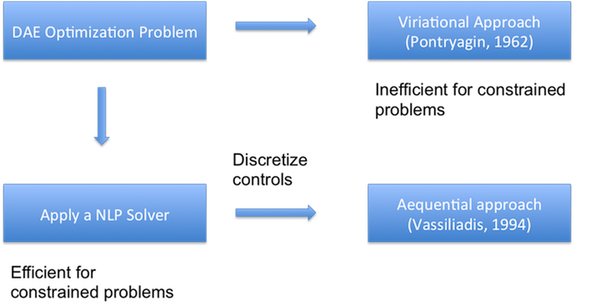 There are several approaches can be applied to solve the dynamic optimization problems, which are shown in Figure 2.

We first consider the differential algebraic system shown as follows:

The simultaneous approach requires discretizing of the state variables

. We require the following properties to yield an efficient NLP formulation:

1) The explicit ODE discretization holds little computational advantage because Since the nonlinear program requires an iterative solution of the KKT conditions.

2) A single step approach which is self-starting and does not rely on smooth profiles that extend over previous time steps is preferred, because the NLP formulation needs to deal with discontinuities in control profiles.

3) The high-order implicit discretization provides accurate profiles with relatively few finite elements. As a result, the number of finite elements need not be excessively large, particularly for problems with many states and controls.

Figure 1: Polynomial approximation for state profile across a finite element.

We consider the following ODE:

to apply the collocation method, we need to solve the differential equation (2) at certain points. For the state variable, we consider a polynomial approximation of order

) over a single finite element, as shown in the above figure. This polynomial, denoted by

, can be represented in a number of equivalent ways, including the power series representation shown in equation (3), the Newton divided difference approximation, or B-splines.

We apply representations based on Lagrange interpolation polynomials to generate the NLP formulation, because the polynomial coefficients and the profiles have the same variable bounds. Here we select

， and hi is the length of element

. This polynomial representation has the desirable property that

We use a Lagrange polynomial with K interpolation points to represent the time derivative of the state. This leads to the Runge–Kutta basis representation for  the differential state:

is a polynomial of order K satisfying

calculated separately. For the polynomial representations (4) and (5), we normalize time over the element, write the state profile as a function of τ , and apply

easily. For the Lagrange polynomial (4), the collocation equations   become

determined from the previous element

or from the initial condition on the ODE.

An example is given here to demonstrate the application of the collocation method.

A differential equation is given as follows:

With t \in \left[ {0,1} \right], The analytic solution of this differential equation is

can be obtained. The collocation equations are given as follows:

which can be formulated as: 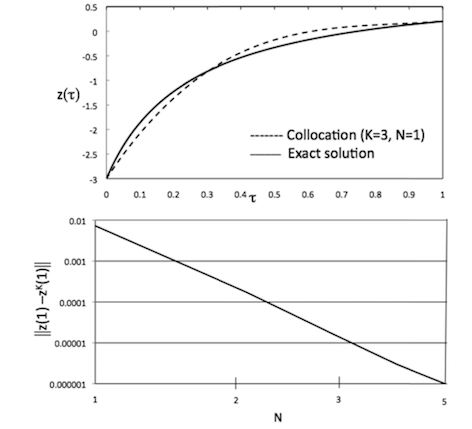 The results are given as following by solving the above equations:

As shown in Figure 3.2 the error

, which is consistent with the expected order

(This example follows the work of Biegler and can be found in P293 of “ Nonlinear Programmng”.)

In this work, we mainly discussed simultaneous collocation approach for dynamic optimization problems, which formulated the differential equations to a set of algebraic equations. These direct transcription formulations depended on fully discretizing of the differential algebraic equations (DAE), which enabled us solve the simultaneous optimization problem without relying on embedded DAE solvers. Because of this simultaneous formulation, we got the exact first and second order derivatives through the optimization modeling system, and both structure and sparsity can be exploited.