This web page is a duplicate of https://optimization.mccormick.northwestern.edu/index.php/Extended_cutting_plane_(ECP)

Extended Cutting Plane is an optimization method suggested by Westerlund and Petersson in 1996 to solve Mixed-Integer NonLinear Programming (MINLP) problems[1]. ECP can be thought as an extension of Kelley's cutting plane method, which uses iterative Newton's method to refine feasible area and ultimately solve a problem within tolerable error. Therefore, ECP method does not require solving Non-Linear Programming(NLP) while Branch and Bound(BB) and Outer Approximation(OA) do require NLP solution for an upper bound. However, ECP generally requires more iterations. Although cutting plane method is criticized for its slow convergence, ECP is more efficient in cases where evaluation of non linear functions are time costly. For example, in optimization of a dynamic separation process done by Stefan Emet and Tapio Westerlund, ECP was 100 times faster than BB and 10 times faster than OA in solving the MINLP[2].

ECP is closely related to OA in that it uses first differential approximation to cut the plane. The difference is that OA solves a NLP problem for its upper bound while ECP only uses solution of MILP in each iteration. This means that OA is more efficient in main iteration loops. This advantage of OA is more prominent in strongly non-linear MINLP problems that are mainly consisted of continuous variables. However, in pure integer non-linear programming problems, OA method does not have any advantage over ECP. Although it takes less iterations for OA to converge, solving NLP problem in each iteration incur more computation work than solving MILP because MILP has only one additional linear constraints in each iteration.

A general MINLP can be formulated as the following:

Since g(x,y) is a convex function set and continuously differentiable it follows that

then for all i

Using these properties, ECP algorithm is as follows:

Step 0. Set k=1. Leave out all nonlinear constraints and set up an MILP problem.

Step 2. Check if the solution satisfies nonlinear constraints. If all constraints are satisfied, in other words, if

is true for all i,

is a global optimum.

Step 3 If any of the constraints are not satisfied, add a constraint for most violated constraint, g 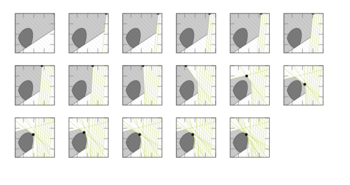 Visualization of how ECP is used to solve MINLP4

Same procedure can be taken for consequent iterations, and with 17 iterations, ECP gives answer of

In non-smooth functions, ECP algorithm can be generalized by relaxing continuous differentiability. Therefore, the only change in the algorithm is that subgradients are used instead of gradients. Subgradient of convex function

ECP is an extension of cutting plane(CP) method that is used to solve NLP problems. The application of cutting plane to MINLP is rather straight forward and the strength of ECP lies in that it is simple and robust. Therefore, it is suitable for solving large MINLP problems with moderate degree of non-linearity and complex system that require extensive computational work. ECP only requires one additional constraint to improve one solution for MILP problem at each iteration whereas both NLP and MILP problems are solved in other MINLP methods. However, since there is only one adjustment made at a time, it has slow convergence to solution.