This web page is a duplicate of https://optimization.mccormick.northwestern.edu/index.php/Logarithmic_transformation

are monomials, and the variables x are all positive.

are positive, real numbers, and all of the exponents

Monomials are a specific case of posynomial where there is no set of terms but rather only one term and its constant. A posynomial is then simply a sum of monomials. An example of a monomial is

and an example of a posynomial is

A posynomial is therefore not of the form

as this is a linear function.

GP problems are not always given and sometimes must be derived.5 Take the following example of a standard NLP problem

where the variables x,y, and z are positive. The standard GP form of this problem would be

The Duffin "dual-program" method for solving GP problems is still in use but as logarithmic and exponential transformation methods were understood it became easier to simply use them to change the standard GP problem into a convex GP problem and solve using an interior point method. Interior point methods can solve GP problems very fast and robust as they require essentially no tuning of the parameters. Most importantly, the final solution obtained through this method is guaranteed to be the global optimum solution. Solving a standard GP problem is like solving an NLP problem. The only difference being that a GP problem is more constrained in its use of posynomials and monomials in its objective function and constraints. This makes standard GP problems more efficient to solve and they can be solved relatively quickly, but like NLP problems there is no guarantee the solution is globally optimum. In addition, an initial guess needs to be provided and parameters must be carefully chosen.5

is minimized. The variable x is replaced with the its logarithm

. The inequality constraint is now

and the equality constraint is now

Therefore the convex form of a GP problem is

are monomials, and the variables y are all positive. This reformulation can occur as long as the constants in the function are positive. 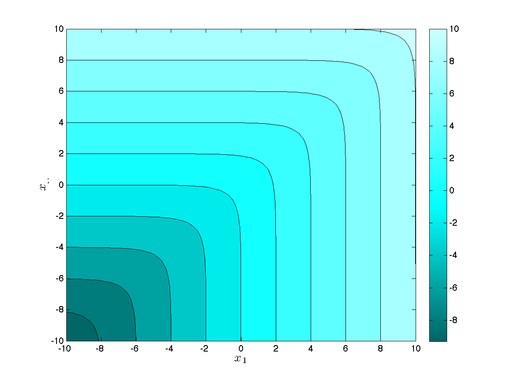 To see the transformation clearer, more detailed steps can be shown. If the objective function is a monomial of the format

. It will also be a logarithm of the original objective function so

which is an affine function of y

Any GP with only monomials reduces to a linear program after a logarithmic transformation. Checking for linearity in a monomial case will confirm if the transformation was done correctly.5

If the GP has posynomials the problem becomes more complex. The log of multiple terms cannot be simplified beyond its logarithm form. So if the objective function is

where c > 0, then the new objective function will be

. The above can be written in a simpler form as

where A is an N by n matrix with rows

and lse is the log-sum-exp function which is convex.6

A few objective functions and constraints are provided in this section as illustrative examples.

To prove that the answers to the above examples are indeed convex, one could verify its convexity through a positive-definiteness test of the Hessian. The reformulations can also be tested in GAMS.

A standard GP problem can be infeasible i.e. the constraints are too "tight" and don't allow for a solution. Because the constraints from a standard GP problem hold over even when changed to its convex form via logarithmic transformation, an infeasible GP problem will always be infeasible regardless of convexity. This is why it is important to check for infeasibility prior to creating a linear transformation. This is done by undergoing a feasibility analysis and setting up the GP as follows:

As s nears a value of 1, the original problem nears feasibility. The final goal is to find a solution such that s=1 so that feasibility of the problem is confirmed.1

Applications of geometric programming include:

A great example among these varied applications concerns optimal reactor design. The chemical systems within a reactor follow non convex kinetics equations. If one wanted to optimize a reactor for a given system with given reaction rates, one could do so easily with a logarithmic transformation. Take a reaction A + B to C with reaction rate

. The logarithmic transformation that would allow one to obtain a convex relation is

. With this new equation, you can optimize your reactor design for your given system.

Geometric Programming is an application that can solve a varying degree of difficult optimization problems but due to the nature of their complexity, these problems cannot be solved easily. Solving geometric problems can be computationally intensive and finding a global optimum solution is not guaranteed. This is due to the fact that GPs involve posynomials and monomials which are by nature non-linear. However, by creating a logarithmic transformation for a problem, one can solve for the globally optimum solution quicker and easier because the GP is changed to its convex form. Logarithmic transformations offer an advantage over other transformations as it allows one to work with smaller values which are less problematic. Logarithmic transformations can be used wherever geometric programming is used which includes applications in chemical engineering and economics.