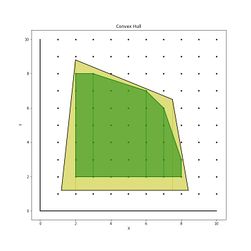 For a given knapsack inequality:

The Gomory cut is defined as:

1. Begin with LP in standard form for application of simplex method.

2. Apply simplex method until convergence, and select any non-integer

, with integer excess, to tableau.

5. Repeat steps 2-4 until all right hand side

For a given knapsack inequality:

The cover inequality is:

Some minimal cover inequalities of Z are:

Flow Cover Cuts were introduced and derived by Padberg, Van Roy, and Wolsey (7).

and upper bound constraints, where

is the capacity of

is a binary variable that determing if

The flow cover inequality is defined as:

Mixed-Integer Rounding (MIR) cuts can be considered a generalization of the Chvatal integer rounding inequality applied to mixed integer linear programs. That is, generating valid inequalities for any mixed-integer programs (8).

The mixed integer rounding inequality is defined as:

contains the cost associated with the basic variables.

for an optimal solution.

is not an integer Fractional part of

Gomory Cut will be made from

of the Simplex Tableau

Solution found, however the basic variable

is negative. The solution is infeasible.

Mixed-Integer Linear Programming is used in areas where fractional amounts are not practical or even impossible such as labor distribution, scheduling, and purchasing additional equipment. Many of these MILP methods utilize one of the many mixed-integer cut methods to find integer solutions from relaxed linear constraints as seen with the Bender decomposition (6). The distribution process through mixed-integer programming allows for more flexible and quicker schedules (4). MILP in scheduling for teachers allows administrators to manage each teacher's load and match a class's needs to the teacher's abilities (5).