In many cases, particularly economics the cost function which is the objective function of an optimization problem is non-differentiable. These non-smooth cost functions may include discontinuities and discontinuous gradients and are often seen in discontinuous physical processes. Optimal solution of these cost functions is a matter of importance to economists but presents a variety of issues when using numerical methods thus leading to the need for special solution methods. 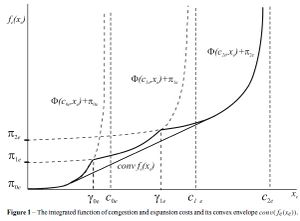 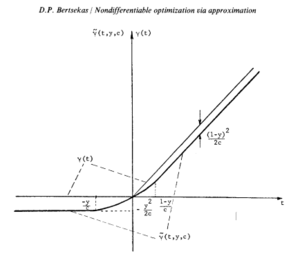 An example of a two parameter kink approximation.

is non-differentiable because of several simple kinks which can be modeled by:

, of the simple kink

Where y and c are parameters with

function is differentiable with the parameters

. The solution can now be iteratively solved by adjusting the parameters c and y and solving the optimization problem

to the approximated objective function will be obtained. The problem is now resolved with an updated parameter for

which is obtained by multiplying

can also be updated if necessary. And a new minimization carried out with the

case. The procedure can be repeated until a value of

that is consistent with the

-Subgradient Method can be applied. This method is a descent algorithm which can be applied to minimization optimization problems given that they are convex.
With this method the constraints won't be considered explicitly but rather the objective function will be minimized to the value

. This makes it such that the minimization of

is the indicator function of

. The solution will converge through a 4 step system, the basis of these steps lies a series of propositions which are further detailed in [1].
Step 1: Select a vector

is the smallest non-negative integer such that

Return to step 2 to iterate until convergence. This method is not only guaranteed to converge but progress towards convergence is made with each iteration.

Cutting planes were first utilized for the convergence of convex non-differentiable equations. The application of cutting planes will use the subgradient inequality to change the function

by approximating it as

. Thus, The original problem is now formulated as

Which is equivalent to the new problem

This new minimization formulation is now differentiable and easier to deal with, however it is only an approximation of the original equation which will become a better approximation as more constraints are added to the new model.

The subgradient optimization method is among the most common methods for convergence of non-differentiable optimization problems. It extends the gradient methods used in smooth optimization but is more complicated as search direction of subgradients is not necessarily the same as improving direction. Details can be further enumerated in the Subgradient Optimization page in this Wiki Textbook.

A simple example of non-differentiable optimization is approximation of a kink origination from an absolute value function. The simple function

due to the presence of a "kink" or point that will not allow for the solution of a tangent. Since the non-differentiable point of the function is known an approximation can be added to relax and smooth the function with parameter

. This new approximation can be modeled