This web page is a duplicate of https://optimization.mccormick.northwestern.edu/index.php/Spatial_branch_and_bound_method

Spatial branch-and-bound is a divide-and-conquer technique used to find the deterministic solution of global optimization problems.1 It is a type of branch-and-bound method, which solves for the set of parameters that globally optimize the objective function, whether that be finding the minimum or maximum value of

, respectively, where x exists over a set of candidate solutions in the feasible region of the problem.

Branch-and-bound is the systematic enumeration of possible solutions by iteratively searching the space of the problem. The problem’s candidate solutions form a rooted tree. The algorithm analyzes the nodes, or the subsets of the solution set. This step is known as branching. Bounding is the estimation of a lower and upper bound for the optimal solution at each node. The possible solution at each branch is checked against these bounds, and if it does not produce a better solution than the current best solution found, the solution is discarded in a step called pruning. This algorithm is repeated until the optimal solution is found. The method was first proposed by A. H. Land and A. G. Doig in 1960 for discrete programming, and its first applications were for discrete problems like the traveling salesman problem.

Spatial branch-and-bound is used to solve global optimization problems of the form:

are the lower and upper bounds of

, respectively. The feasible space of the problem is where

. The goal is to find the point

in the feasible region where

is a given tolerance.

The main algorithmic idea is to divide the problem into smaller subproblems by branching the variables into possible values, creating upper and lower bounds of the function in the certain domain, and finding sequences of approximate solutions which converge to the actual solution. The smaller subproblems are easier to solve than the original problem.2

A branch and bound method using an exact selection rule will converge. Let M be the space of the sample. M is split at some iteration because it consists of an unqualified region that does not include candidate solutions that give the objective function more optimal solutions than the current incumbent solution. Thus, every qualified subregion of Mn contains the optimal solution.1

It is noted that the spacial branch and bound algorithm does not guarantee convergence in a finite number of steps. The algorithm here uses the concept of ɛ-optimality instead of the usual idea of optimality. A solution x* is a global optimum if f(x*) < f(x) for x in the problem space. Because ɛ is positive, xɛ in the problem space is ɛ-globally optimal if the optimum is bounded by m ≤ f(x*) ≤ M where f(xɛ) is in [m,M] and M - m < ε. Finding the ε-global optimum solution ensures a finite termination than a usual global optimum solution.1 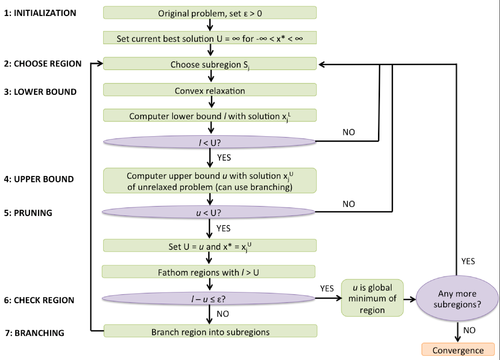 Initialize the subregions Sj to a single region S encompassing the set of all variables and their ranges. Set the convergence tolerance, ɛ > 0, and the best solution U = ∞ and the corresponding solution -∞ < x* < ∞.

A subregion Sj of the problem is chosen.

Bound tightening may be performed during the first two steps. For the initialization step, optimization-based bounds tightening involves finding the smallest range of each variable subject to convex relaxation that will still make the problem feasible. This bounds tightening, however, is computationally expensive because 2n convex NLP or linear convex relation problems have to be solved, where n is the number of variables. For the second step, feasibility-based bounds tightening is performed at each region. Here, the variable bounds are tightened with the constraints of the original problem. This type of bounds tightening is computationally less expensive than the former. The spatial branch-and-bound algorithm will still converge without bound tightening, but it may make the process faster.

The new problem is solved to give an underestimation l of the objective function with solution xjL. If l > U , the relaxed problem is infeasible and step 2 is repeated. 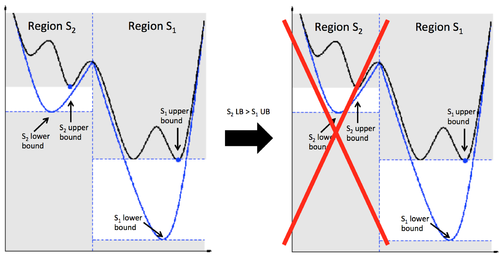 Since the lower bound (LB) of S2 is greater than the upper bound (UB) of S1, which is the current best solution, so the solution in the region S2 is infeasible and discarded.

The original nonconvex problem in the selected region is solved to obtain a local optimum solution xjU with objective function u . The subproblem can be solved numerically or by branching. If the spatial branch-and-bound algorithm has added variables, branching can be done on those. Convex relaxation is done, and the lower and upper bounds are found. These bounds are not dependent on the added variables. Branching can also be done on the original variables. The range of the original problem [xL, xU] is partitioned into [xL, x'] and [x', xU]. The upper bounding problem is solved in each subregion.

Algorithms that solve nonconvex NLPs are fragile and can fail even if a local optimum solution exists. If the function is unable to be solved, set u = ∞ and -∞ < xjU < ∞.

The region is split into sub-regions, and the algorithm returns to step 2. There are several strategies for branching, and most consist of determining the set of variables on which to branch and the variables whose domain is sub-divided by the branching operation. 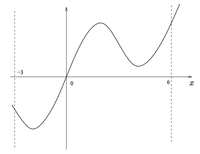 The above NLP has two minima, one of which is global. Using the spatial branch-and-bound approach, the space of the problem is divided into subregions, within which the lower and upper bounds of the optimum is found. If the bounds are not within a given

tolerance (that is, the bounds are not sufficiently close), then the subregion is partitioned and the process is repeated. In this example, let

Consider the region that encompasses the entire range

. To tighten the bounds, tangents to

The convex estimator is then

The minimum of the convex problem is found to be

Next, the upper bound of the problem is solved locally using Newton's method with

as the starting point. The upper bound is found to be

are not sufficiently close since

, so it is not certain that

is a global optimum of the region.

The region is partitioned into two subregions, using

as the branching point. The two unexamined regions are now 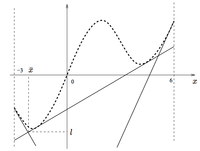 The convex relaxation and lower bound of the first region examined.1

be the first region to be examined. The lower and upper bounds are found to be

is accepted as the global optimum of the region analyzed. The best solution found thus far is now

. Since a global optimum exists, the region does not need to be branched. 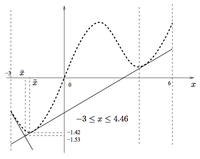 is examined. The lower and upper bounds are computed to be

, the solution found is the optimum of the subregion, and branching is not necessary. The best solution found thus far does not need to be updated since

, so this region is discarded. The algorithm converges at the global optimum 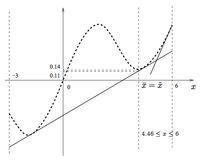 This example illustrates important features of the spatial branch-and-bound approach. First, the convex relaxation can be made tighter in each region. Second, in problems with multiple variables, the choice of the variable on which to branch is important. Third, the subregions are pruned when its lower bound is higher than the best solution found thus far.

Spatial branch-and-bound is used to solve a number of problems, including