Difference between revisions of "Subgradient optimization"

This web page is a duplicate of https://optimization.mccormick.northwestern.edu/index.php/Subgradient_optimization 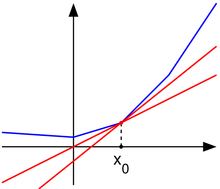 The Subgradient (related to Subderivative and Subdifferential) of a function is a way of generalizing or approximating the derivative of a convex function at nondifferentiable points. The definition of a subgradient is as follows:

is a subgradient of

, the following is true:

An example of the subgradient of a nondifferentiable convex function

can be seen below:

is a subgradient at point

are subgradients at point

. Notice that when the function is differentiable, such as at point

is convex, then there is at least one subgradient at every point in its domain. The set of all subgradients at a certain point is called the subdifferential, and is written as

is a convex function with domain

the subgradient method uses the iteration:

is the number of iterations,

is any subgradient at

th step size. Thus, at each iteration of the subgradient method, we take a step in the direction of a negative subgradient. As explained above, when

. It is also important to note that the subgradient method is not a descent method in that the new iterate is not always the best iterate. Thus we need some way to keep track of the best solution found so far, i.e. the one with the smallest function value. We can do this by, after each step, setting

is the best (smallest) point found so far. Thus we have:

which gives the best objective value found in

iterations. Since this value is decreasing, it has a limit (which can be

An algorithm flowchart is provided below for the subgradient method: 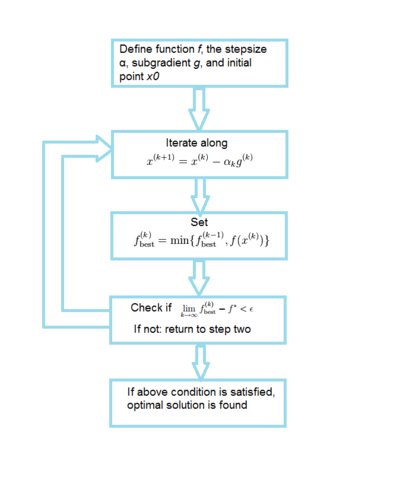 One typical example is

One typical example is

is the optimal solution to the problem and

is the aforementioned range of convergence. This means that the subgradient method finds a point within

of the optimal solution

is number that is a function of the step size parameter

decreases the range of convergence

also decreases, i.e. the solution of the subgradient method gets closer to

with a smaller step size parameter

. For the diminishing step size rule and the square summable but not summable rule, the algorithm is guaranteed to converge to the optimal value or

is differentiable the subgradient method with constant step size yields convergence to the optimal value, provided the parameter

Since this is a linear programming problem finding a subgradient is simple: given

we can find an index

The subgradient in this case is

. Thus the iterative update is then:

is chosen such to satisfy

and the ability to carry out the iterative update. Even if the problem is dense and very large (where standard linear programming might fail), if there is some efficient way to calculate

then the subgradient method is a reasonable choice for algorithm. Consider a problem with

generated from a normal distribution. We will consider all four of the step size rules mentioned above and will plot

, the nuber of iterations.
For the constant step size rule

for several values of

the following plot was obtained: 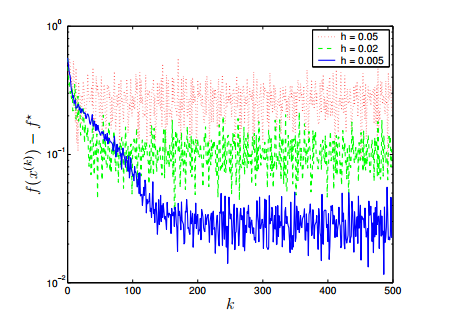 For the constant step length rule

for several values of

the following plot was obtained: 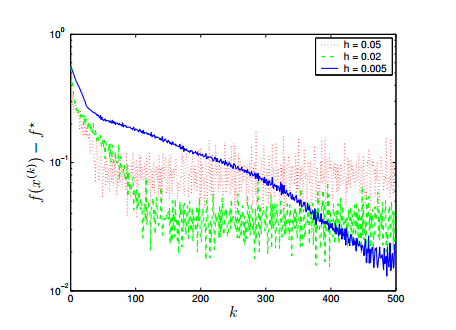 The above figures reveal a trade-off: a larger step size parameter

(blue) and the square summable but not summable step size rule

(red) are plotted below for convergence: 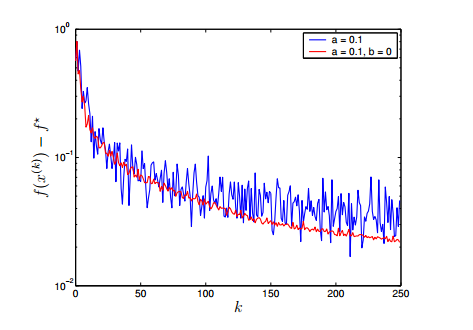 in the constant step size and length rules and different formulas for the nonsummable diminishing step size rule and the square summable but not summable step size rule in order to get good convergence in the smallest amount of iterations possible.