Algorithms have many purposes in the world of optimization, from Gradient Descent to Belman-Ford, algorithms have been used widely in the world of optimization. Hoping to create better pathing for their new robot, the Shakey project of DARPA created the A-star (A*) a shortest path algorithm that uses heuristics to navigate a terrain. Since then, A* has many modern applications in computer science one of which is the optimal travel path between two locations based on travel time or distance. Optimal path traveled is increasingly important throughout society.

A* Algorithm can optimize this travel through finding the shortest, cheapest, and most efficient path between two points helping to lower the travel time of everyday travelers, more efficiently conduct cross country shipments and lower the emission production of cars as they travel. By creating a heuristic for and minimizing the travel distance, time and fuel usage while still resulting in a completed trip. This document will introduce the situation of an optimized trip from Cornell University to Harvard University using the A* Algorithm impacted by the travel distance, time and fuel usage parameters.

From its start as a path finding algorithm for a robot, A* Algorithm has grown to be a staple in modern optimization of shortest path algorithms. A* was built originally as a greed algorithm finding an initial solution and improving upon it while remaining in the created bounded space. According to "Integer programming" by Laurence Wolsey "The idea of a greedy heuristic is to construct a solution from scratch (the empty set. choosing at each step the item bringing the "best" immediate reward" [1]. This holds true for the ship travel example of the “Research on Ship Meteorological Route Based on A-Star Algorithm” study where an empty set was initialized and a greedy algorithm was first found based on a shortest distance heuristic from the goal. The solution was then improved upon through recursion or a feasible solution is not found. The heuristic is the other part of A* algorithm derived from a greedy search with a proper heuristic properly defining the cost between the nodes. "Integer Programming" states this by stating "Greedy heuristic have to be adapted to the particular structure. For [shortest-path problems] there are several possible greedy heuristics that choose edge one after another until a tour is obtained." [1]. This use of a heuristic can be seen in all other application of A* in shortest path problems where a path is found through a heuristic determined by distance of node from the goal.

Pseudo code example of A* algorithm built of greedy algorithm:

An early study of the algorithm was done in “A Comparative Study of A-Star Algorithms for Search and Rescue in Perfect Maze” by Xiang Liu and Daoxiong Gong of Beijing University of Technology in 2011 where the algorithm was used to track the fastest path through a maze. Three A* Algorithms were used with different heuristics based on Euclidian distance, Euclidian distance from start and from base of current path and angle from current position to the goal shown in variations of the standard A* Algorithm:

is the Euclidian distance to the target

Variation 2: is the position,

is the Euclidian distance,

On all occasions at least one of the A* Algorithms out performed a depth search with the second heuristic performing the best "generally, in unknown maze, while only proximate location of target point is known, A∗ algorithm is better than depth-first search algorithm in searching, however when the heuristic functions are different, searching results are also different." [2] Figure 1 shows the results of the maze experiment using 10 perfect randomly generated mazes.

Figure 1. Table showing the result for the ten perfect mazes test in “A Comparative Study of A-Star Algorithms for Search and Rescue in Perfect Maze”[2]

Many discussions exist revolving the best use of the A* Algorithm and also where it is most highly utilized. One of them being the game industry, mainly used to find the shortest path. There is a plethora of shortest path algorithms but A* is one of the preferred methods.[3] A* Algorithm is an implementation of heuristic search, a process that will give an estimation value from current node to goal node. This implementation will always find the smallest value optimal path using:

is the distance from starting node to

is a heuristic value of estimation distance from node n to finish node.[3]

One of the methods of using the A* Algorithm in the gaming industry is when creating automated movement for non-playable characters, the challenge being that they need to move in a realistic way. The combination of using a hexagon based environment versus a grid based environment is one of the discussions seen today.

The A* Algorithm is a great approach for finding the lowest-cost path between two points. In the Figure 2, we are seeking to find the shortest distance between two nodes. 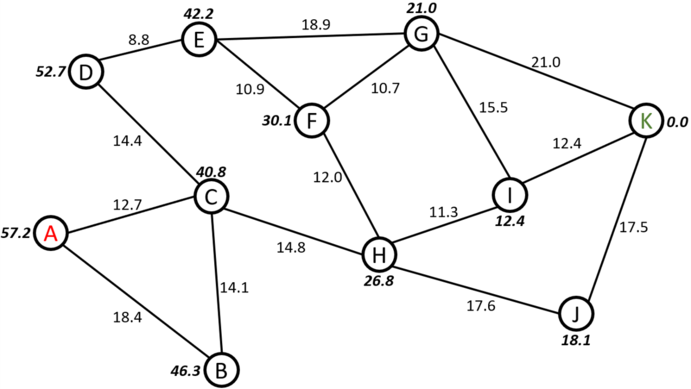 Below, steps are outlined for how the objective function is executed.

Starting from Node A, Node C or Node B can be chosen; by applying the A* Algorithm below, the best path can be chosen.

Step 1: For Node B, the heuristic value,

yields the smaller value, this value is chosen as taking the path between Node A and Node C. This path is highlighted yellow in Figure 3. 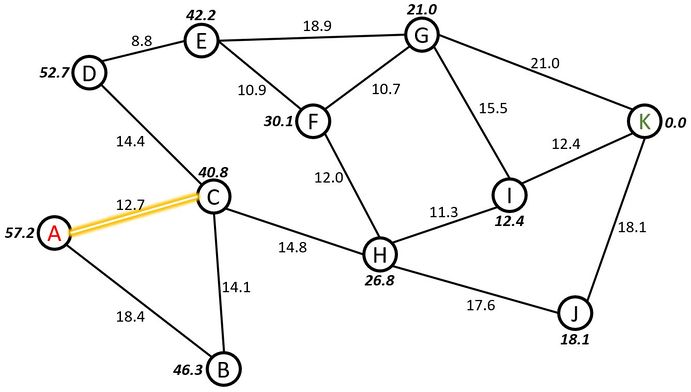 Figure 3. Map Highlighting the Chosen Path from Node A to Node C

Now, the A* algorithm is employed to chose the next path from Node C. Here, Node D or Node H can be chosen.

yields a smaller value, this value is chosen as taking the path between Nodes C to H. The path is highlighted yellow in Figure 4. 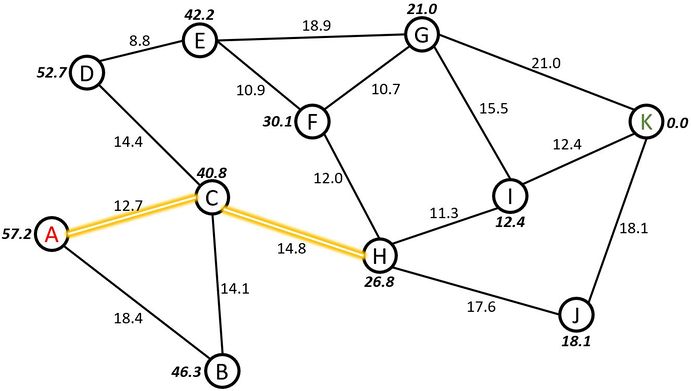 Figure 4. Map Highlighting the Chosen Path from Node A through Node H

Next step applies A* algorithm from Node H to either Nodes I or J.

Step 7: For Node I, the heuristic value,

yields a smaller value, this value is chosen as taking the path from Nodes H to I. The path continues to be highlighted yellow in Figure 5. 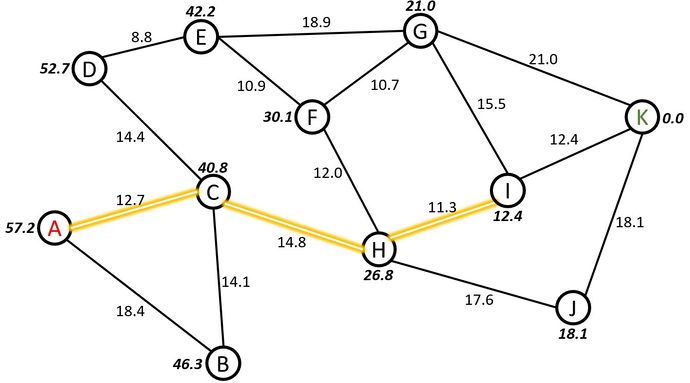 Figure 5. Map Highlighting the Chosen Path from Node A through Node I

Next step applies A* algorithm from Node I to either Nodes G or K.

is the smaller value, and K is the objective Node, the A* Algorithm has found the shortest path between Nodes A and K. The path is highlighted in Figure 6. 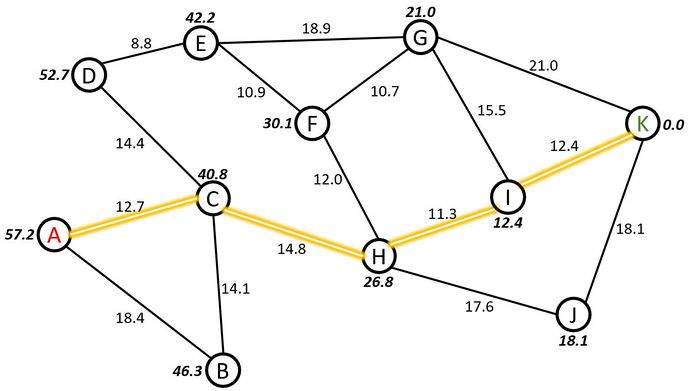 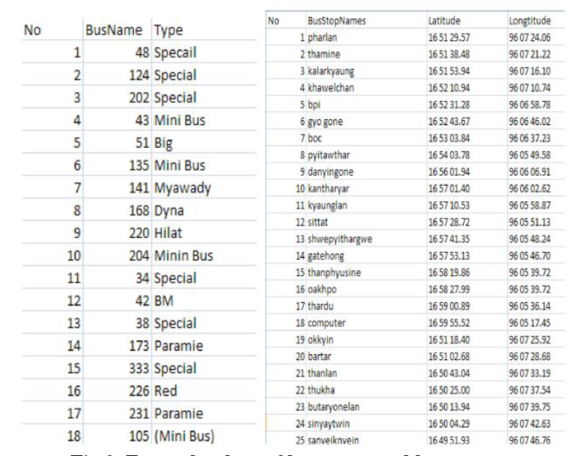 The approach to analysis with the implementation of the A* algorithm was similar to our initial approach. This proposed system in the Yangon area focused solely on the distance between nodes. To improve efficiency, an algorithm that includes data and analysis on traffic patterns, road closures and wait times for bus stops would aid users in optimizing their transportation selection. The use of the A* algorithm bus network in a region so heavily reliant on public transportation is a respectable strategy to address transportation concerns in the Yangon area.

Pathfinding algorithms are increasingly used in video game development globally. Artificial Intelligence issues are prevalent as these games increase in complexity. Decision-making, movements and strategy are instances where pathfinding algorithms, such as the A* algorithm, are utilized to find optimal solutions. In video games where users make decisions, path finding may increase with complexity as decisions are dynamic according to the user's input. Pathfinding uses up CPU power and memory. The objective is to optimize paths between characters and their endpoints to minimize CPU power and memory used to maximize game performance.

Through the use of a serpentine node map system, using each road and intersection as an edge and node respectively and scoring each based on our characteristics, a basis was built on which to run the A* algorithm. The algorithm was then able to traverse the map finding the shortest, fastest, and most fuel-efficient path in order to minimize the inconvenience to the traveler and the environmental impact. Through the A* algorithm on the node map travel can be optimized to be more efficient and faster for both commercial and pedestrian travel.