to a few hundred. In the black-box setting, no additional information is known about

. Hence, there is no observation of first- or second-order information when evaluating

. This is commonly referred to as derivative-free optimization.[1]

Moreover many non Machine Learning based methods also benefit from the use of BO. For example, material discovery, manufacturing design are also effective uses of BO.

Here in the Gaussian Process is described in detail:

Gaussian Process can be described as a collection of random variables, where any finite number of the function

are jointly normally distributed. It is defined by a mean function

and a covariance function

that returns similarity among two points. The Gaussian process models the objective function as:

points, the objective is to make prediction about the function value at a new point

is jointly normally distributed with the observations

Since the function values in equation above are jointly normal, the conditional distribution

must also be normal, and thereby the standard formula for the mean and variance of this conditional distribution becomes:

Using this formula, the distribution of the function at any new point

can be estimated.The best estimate of the function value is given by the mean

, and the uncertainty is given by the variance

is the generic symbol for an acquisition function.

, improves over the current best observation is maximized. One problem with the approach taken in PI is that it will, by its nature, prefer a point with a small but certain improvement over one which offers a far greater improvement, but at a slightly higher risk. In order to combat this effect, EI proposes maximizing the expected improvement over the current best known point.[8]EI has been shown to have strong theoretical guarantees and empirical effectiveness[9] , and is often used as the acquistion function as a baseline. The formulations of common acquisition functions, Upper Bound Confidence, Probability of Improvement and Expected Improvement are defined below:

This acquisition function is defined as:

. For each point x∗, the goal is to integrate the part of the associated normal distribution that is above the current maximum (figure 4b) such that:

The expected Improvement can be modelled as:

Here follows a longer example of mathematical-style pseudocode, for the Bayesian Optimization [10]:

Bayesian Optimization has shown a wide variety of interest in areas of data science and Chemical Engineering, Material Science domain. Certain application include; robotics, environmental monitoring, combinatorial optimization, adaptive Monte Carlo, reinforcement learning. [11] Some of the applications are described below in detail:

Here using the HyperOpt package [17]; a simple optimization problem will be solved: The example is broken down into four steps:

The minimization problem can be defined as:

is a fixed objective function that is evaluated pointwise. The first assumption is that there is no access to the gradient of

. A second assumption is the evaluations of

The problem is solved by using Bayesian Optimization, and defining the prior, a posterior to derive an acquisition function at each time step. In order to solve using BO, a sequence of points

will be constructed that converge to 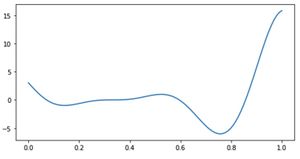 Setting a Gaussian Process Prior

As described earlier, the Gaussian Process is most commonly used as the prior, for Bayesian Optimization.

In the example: Given inputs

and the corresponding noise observations

, the model takes the form:

The domain is the value of

over which the function is evaluated. Hence a uniform distribution is utilized in this case over the space of function defined.

In the equation below,

is i.i.d Gaussian noise and

is a covariance matrix whose entries are given by

for each pair of inputs

The Lower Confidence Bound acquisition function is defined as :

Results and Running the Optimization

and update the posterior, until convergence.

Results for the first 8 iterations for the Gaussian Process Regression and Acquistion functions are shown in Figure 2 and Figure 3. As one of the assumptions stated earlier was that the observation contain noise, it is impossible to converge to the ground truth solution.However, as seen in Figure 2 an 3; with a limited budget of 8 evaluations; BO has converged close to the global minimum at 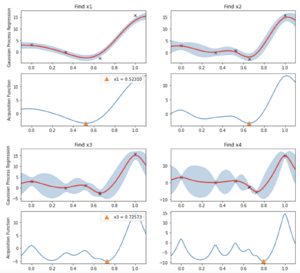 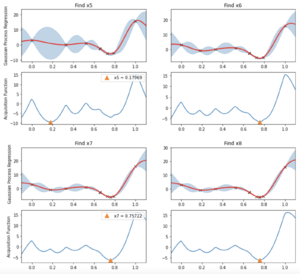 Figure 4: GPR and Acquistion Function for next four iterations

Here are a list of packages in Python, Java, C++that utelize Bayesian Optimization

In conclusion; Bayesian Optimization primarily is utilized when Blackbox functions are expensive to evaluate and are noisy, and can be implemented easily in Python. Bayesian optimization uses a surrogate function to estimate the objective through sampling. These surrogates, Gaussian Process, are represented as probability distributions which can be updated in light of new information. The Acquisition functions, Upper Bound Confidence, Probability of Improvement, Expected Improvement, then are used to evaluate the probability of exploring a certain point in space will yield a good return. Lastly Bayesian optimization is often extended to complex problems including and not limited to hyperparameter tuning of machine learning models [19].