When given a set of inequalities, such as

, the disjunctive form is given by:

[1] In order to turn the problem into a solvable MIP or MILP, logical constraints are created by using sufficiently large numbers, such as

, and a binary variable y for each inequality. This is shown below by

To set the binary variable to be mutually exclusive, the sum of the variables is set to 1 and the range is set to {0,1}. 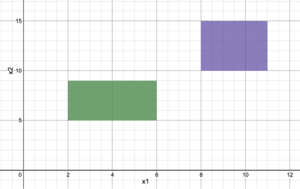 Figure 1: Disjunctive inequality solution space that can be solved via disjunction using the Big-M Reformulation or the Convex-Hull Reformulation

For the Big-M reformulation, a sufficiently large number,

, is used to nullify one set of constraints. This is accomplished by adding or subtracting the term “

” to the upper bound and lower bound constraints, respectively, with its respective binary variable. While choosing a large M value allows for isolation, the large value also yields poor relaxation of the model space.[3]

For example, given a solution space

(shown graphically in Figure 1), to determine which of the solutions is optimal, the problem must be formulated such that one set of constraints is chosen. Using the Big-M Reformulation, the following MILP set would be obtained:

Similar to the Big-M reformulation, the convex-hull reformulation uses a binary variable, y, to constrain the set of inequalities. The first step in converting the problem into a solvable MILP is breaking all variables into a set of variables, such as (

). By adding these addition variables, it is possible to isolate what set of parameters provide for the optimal solution of the problem. Then, similar to the Big-M reformulation, a sufficiently large variable, M, is used to nullify the non-optimal variable set, such as

. For the problem show in Figure 1, the following variable constraints would be formulated:

Formulation of the numerical constraints would then be implemented:

With the Convex-Hull transformation, the additional constraints confine the problem, such that a tighter (convex) solution space is examined compared to Big-M Formulation.[3]

We begin by setting introducing a binary variable y as a summation to 1:

Next we begin by grouping our

Keep in mind the

must be sufficiently large, too large of a value can yield to poor relaxation of the LP.

, subject to the original constraint when

The reformulated constraint set is thus all of these constraints, making the problem a MIP.

We now present the same constraint set reformulated by the Big-M method. We can begin by setting 2 binary variables

Next, we add the binary variable

as it is a arbitrarily large constant which is used to reformulate the inequality. Each inequality is formed in a single step by adding or subtracting

In this way, if 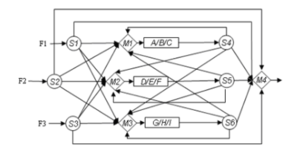 The Strip Packing Problem is a well-known problem in which two dimensional rectangles, or strips, are aligned in a two dimensional grid, subject to the constraints that the strips do not overlap. One method of formulating this problem is to describe the non-overlapping constraints as a set of four statements: for an existing rectangle

must be above, below, to the left, or to the right of rectangle

. Each situation represents a unique inequality constraint; for example, if

, then it must hold that the lower border of

is at a greater value than the lower border of

plus the height of

. This can be extended to remove symmetries and improve efficiency of the solutions as well[4]. This can also be extended into three dimensions, for applications such as loading a cargo ship.

In this general formulation,

Figure 2 shows a special case of process scheduling, a wastewater network that removes pollutants from its mixture. The task is to figure out the total cost to discharge the pollution.[6] This wastewater system can be reformulated into a non-convex General Disjunction Programming problem shown below:[6]

As shown, disjunctive inequalities can be used to formulate various different types of mixed-integer program linear and nonlinear programs where binary decisions determine constraint sets. Two methods that are used to reformulate the problem are Convex Hull and Big-M reformulations. It could be shown that to obtain the convex hull of a 0 or 1 mixed-integer program, it suffices to take the convex hull of each 0 or 1 variable at a time [3]. Implementing the Big-M method generates a much smaller MILP/MINLP with a tighter relaxation than the convex-hull method, providing more efficient computational solutions. Disjunctive inequalities can also be used to improve the performance of any general purpose Branch-and-Cut algorithm as shown on the research from Balas and Bonami [7]. Many of the real world problems that can be solved through disjunctive inequalities involve process optimization where various binary decisions have to be made to optimize the solution. Examples of real world problems illustrated here include cargo packing and processing plants such as wastewater treatment plants. In conclusion, formulating these types of problems with disjunctive inequalities allows for a simple representation and conversion to MILP/MILP, solvable with standard MILP/MINLP solution algorithms.