The Frank-Wolfe algorithm is an iterative first-order optimization algorithm for constrained convex optimization, first proposed by Marguerite Frank and Philip Wolfe from Princeton University in 1956.[1] It is also known as the “gradient and interpolation” algorithm or sometimes the “conditional gradient method” as it utilizes a simplex method of comparing an initial feasible point with a secondary basic feasible point to maximize the linear constraints in each iteration, to find or approximate the optimal solution.

Advantages of the Frank-Wolfe algorithm include that it is simple to implement; it results in a projection-free computation (that is, it does not require projections back to the constraint set to ensure feasibility); and it generates solution iterations that are sparse with respect to the constraint set. However, one of the major drawbacks of Frank-Wolfe algorithm is its convergence in practical applications, which can potentially be a computationally intensive process. This has enabled research into new revisions and heuristics to accelerate the algorithm by better aligning the descent direction while still preserving the projection-free property. [2] Therefore, despite the downside of Frank-Wolfe algorithm, the numerous benefits of this algorithm allow it to be utilized in artificial intelligence, machine learning, traffic assignment, signal processing, and many more applications. 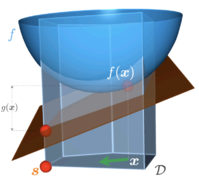 Figure 1. The Frank-Wolfe method optimizes by considering the linearization of the objective function f and moving the initial position x towards the minimizer of the linear function.[3]

The Frank-Wolfe algorithm uses step size and postulated convexity, which formulates a matrix of positive semidefinite quadratic form. Just like a convex function yields a global minimum at any local minimum on a convex set, by the definition of nonlinear programming, the concave quadratic function would yield a global maximum point at any local maximum on a convex constraint set.

The methodology of the Frank-Wolfe algorithm starts with obtaining the generalized Lagrange multipliers for a quadratic problem, PI. The found multipliers are considered solutions to a new quadratic problem,  PII. The simplex method is then applied to the new problem, PII, and the gradient and interpolation method is utilized to make incremental steps towards the solution of the original quadratic problem, PI. This is performed by taking an initial feasible point, obtaining a second basic feasible point along the gradient of the objective function at the initial point, and maximizing the objective function along the segment that joins these two points.  The found maximum along the segment is utilized as the starting point for the next iteration.[1] Using this method, the values of the objective function converge to zero and in one of the iterations, a secondary point will yield a solution.

PI is represented by the following equations using matrix notation:

Since PI is feasible, any local maximum found that is contained within the convex constraint set is a global maximum. Then by utilizing Kuhn and Tucker's generalizations of the Lagrange Multipliers of the maximization of the objective function

is considered the solution of PI.

By the Duality Theorem,

for PI is only valid if:

Therefore, by the generalization of Lagrangian,

is extracted with linear constraints:

The completion of the generalized Lagrangian shows that

Based on the concavity of

(where x is a solution if for some

By the Boundedness Criterion and the Approximation Criterion,

The Frank-Wolfe algorithm then adds a non-negative variable to each of the inequalities to obtain the following:

Thus, the PII problem is to obtain search vectors to satisfy

is considered a solution of PI if

lines as shown in Figure 1.

The Frank-Wolfe algorithm can generally be broken down into five steps as described below. Then the loop of iterations continues throughout Step 2 to Step 5 until the minimum extreme point is identified.

is the extreme point, the initial arbitrary basic feasible solution can be considered as:

denotes the number of iterations.

Search direction, that is the direction vector is:

are feasible extreme points and belong to

and problem is now reformulated to LP:

is defined by the following formula where

must be less than 1 to be feasible:

is an approximation of

and return to Step 2 for the next iteration.

In the Frank-Wolfe algorithm, the value of

descends after each iteration and eventually decreases towards

Consider the non-linear problem below:

Begin by choosing the feasible point

and take the partial derivatives of the objective function

Obtain the search direction by solving the linear problem that is subject to the constraints defined.

The next point is determined by the following formula:

If the following equation yields a zero, the optimal solution has been found for the problem.

Since the solution is not zero, the extreme point

is not optimal and another iteration is required.

From Step 4 in Iteration 1,

Since the gradient of the new starting point is

, the optimality test for the value of

is the optimum solution for this non-linear problem.

Figure 2. The process of co-localization that captures common objects by using bounding boxes.[4]

Co-localization is one of the programming methods in the machine learning field used to find a common object within a set of images or video frames. The process of co-localization involves first generating multiple candidate bounding boxes for each image/ video frame, then identifying the specific box in each image/ video frame that jointly contains the common object.[5] This technique is extremely important for analyzing online data. By being able to recognize the common objects, visual concepts can be tagged into specific labels, thus leveraging useful data for other marketing and product design purposes. Such development is especially useful for image and video hosting services such as Flickr and YouTube.

The formulation of co-localization using the Frank-Wolfe algorithm involves minimizing a standard quadratic programming problem and reducing it to a succession of simple linear integer problems. The benefit of the algorithm is that it allows many more images to be analyzed simultaneously and more bounding boxes are generated in each image/ video frame for higher accuracy. By relaxing the discrete non-convex set to its convex hull, the constraints that define the original set can now be separated from one image/ video to another. In the case of co-localizing videos, the constraints use the shortest-path algorithm to reach optimization.[4]

A typical transportation network, also known as flow network, is considered as a convex programming problem with linear constraints. With the vertices called nodes and the edges called arcs, a directed graph called a network is formed and the flow is monitored via the movement from one node, origin (O), to another node, destination (D) along the arc. The objective of this programming problem is to achieve user-equilibrium, which means system flow is set optimal without incurring unnecessarily high cost for users.

Due to the algorithm’s effectiveness in optimizing traffic assignment problem, it has been widely applied in many fields other than the estimation of the total demand for travel via road between a set of roads and zones. These applications include data-driven computer networks, fluids in pipes, currents in an electrical circuit and more.

Although Stochastic Gradient Descent (SGD) is still the conventional machine learning technique for deep learning, the Frank-Wolfe algorithm has been proven to be applicable for training neural networks as well. Instead of taking projection steps via SGD, the Frank-Wolfe algorithm adopts the simple projection-free first-order function by using the linear minimization oracle (LMO) approach for constrained optimization [7]:

Through LMO, non-unique solutions to the above equation that were deemed impossible by gradient-descent-based optimization would now be possible. In addition to the linearization approach, sparsity regularization is also applied to the scaling factors in the optimization of deep neural networks.[8] By forcing some factors to zero, the highly complex computational process of training deep neural networks is simplified. Since the other major characteristics of Frank-Wolfe algorithm is describing solutions with sparse structures, deep neural network training benefits greatly from the application of this algorithm.

The Frank-Wolfe algorithm is one of the key techniques in the machine learning field. The algorithm features favor linear minimization, simple implementation, and low complexity. By using the simplex method that requires little alteration to the gradient and interpolation in each iteration, the optimization of the linearized quadratic objective function can be performed in a significantly shorter runtime and larger datasets can be processed more efficiently. Therefore, even though the convergence rate of Frank-Wolfe algorithm is slow due to the search for naive descent directions in each iteration, the benefits that the algorithm brings still outweigh the disadvantages. With the main characteristics of being projection-free and the capability of producing solutions for sparse structures, the algorithm gained popularity with many use cases in machine learning.