Interior point (IP) methods are used to solve all kind of problems from linear to non-linear, from convex to non convex. The first known IP method is Frisch's (1955) logarithmic barrier method that was later extensively studied by Fiacco and McCormick [1]. However, these methods mainly emerged in the late 1970's and 1980s. They were developed as algorithms to solve linear programming(LP) problems with a better worst case complexity than the simplex method [2]. In 1984, Karmarkar used IP methods to develop 'A new polynomial-Time method for Linear Programming' [3]. The main advantage of this method was better practical performance than the earlier algorithms like the ellipsoid method by Khachiyan [4]. After Karmarkar's publication more intensive research in this field led to development of a new category of IP methods known as 'primal-dual' methods. Currently, most powerful type of primal-dual codes are Ipopt, KNITRO and LOQO [5]. In recent years the majority of research in the field of IPs is for nonlinear optimisation problems, especially for second order (referred as SOCO) and semidefinite optimisation ( referred as SDO). SDO has wide range of applications in combinatorial optimization, control, structural engineering and electrical engineering [6].

General form for any nonlinear constrained optimization problem can be depicted as shown in Equation set 1:

Consider a general equation of the form as shown in Equation set 2:

Now we need to convert this form to the form as shown in Equation set 1. For this the inequality '

which can be further written as:

Thus the set of equation '

Once the given problem is converted to the standard form (as shown in Equation set 1), we will now try to remove the inequality constraint

using the barrier term. We will introduce natural log barrier term for inequality constraints as shown in Equation set 3:

is not defined for

. Our goal is to solve this barrier problem for a given

and resolve the problem. If

is decreased at the right rate and the approximate solutions are good enough then this method will converge to an optimal solution of the non linear optimization problem. We want to only search in the interior feasible space.

Following example shows how barrier term can be incorporated into the objective function:

For different values of 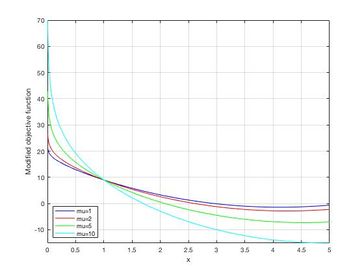 Figure 1: Variation of given objective function for different values of 'μ'

After we know the basics described above, the following methodology adopted from [7] can be used to solve the non-linear optimization problem.

KKT conditions for the barrier problem of the form:

We can define now define

and solve the modified version of the KKT conditions:

is simply a column vector of ones i.e.

to satisfy the rules of matrix operations.

are the search directions for the

is the second gradient of the Lagrangian.

The above system can be arranged into symmetric linear system as follows:

We can then solve for

after finding the linear solution to

with the following form of the explicit solution:

Convergence criteria can be defined when KKT conditions are satisfied within a tolerance: 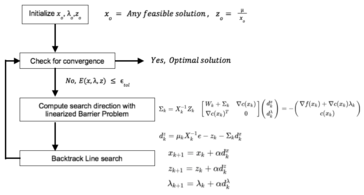 In order to understand the concept of central path and how the barrier method is different from primal-dual method, the following methodology adopted from [9] can be used:

Consider the simple case of an LP with the following form:

Assuming primal and dual problems are strictly feasible and

Central path : Set of points with

is unique for all

is strictly primal feasible and satisfies:

can be calculated as:

The bound on the sub-optimality of

is the optimal value of the LP.

This problem needs to be converted into standard form first:

The initial guess values can be selected as

We will also choose the initial guess values of

Now we will calculate the values of

at the initial guess values.

In the above equation Matrix

are basically diagonal matrices with the diagonal elements as follows:

As defined earlier, the matrix

is simply a column vector of ones i.e.

and we have chosen initial guess values of

Now we have everything to substitute in the following equation and calculate the search directions and iterate till we fulfil the convergence criteria:

We can now implement BPOPT solver using MATLAB to get the following results as illustrated by [11]: 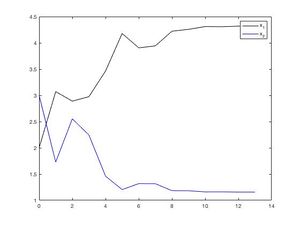 Figure 3: Variation of x1 and x2 as iterations progress [11]

From figure 3 we see that the solver has converged to following optimal values of x1 and x2 in '13' iterations. 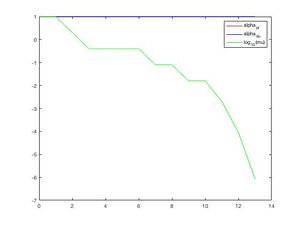 is decreasing as we progress towards the solution (increasing iterations).

IP methods have proven computationally to be viable alternative for the solution of several power engineering optimisation models. A variety of these are applied to a number of power systems models. 'Optimal power flow (OPF)' seeks the operation point of a power system that maximizes a given objective function and satisfies operational and physical constraints. Given real-time operating conditions and the large scale of the power system, it is demanding to develop algorithms that allow for OPF to be decomposed and efficiently solved on parallel computing systems [12]. As compared to gradient based algorithms primal-dual based interior point methods have faster convergence rates.

A hydro-thermal coordination program deals with the problem of finding the scheduling and the production of every hydro and thermal plant of a system so that the customer demand is supplied at minimum cost with a certain level of security and all constraints related to the thermal and hydro subsystems are satisfied. A medium-term hydro-thermal coordination (MTHTC) problem results in a very large Non-Linear Mixed-Integer Programming problem [13] IP optimisation codes are used to find the solution of these MTHTC problems.

IP methods are also used in Voltage collapse and reliability evaluation. Power flow unsolvability occurs when for a given set of active and reactive power loads the power flow equations have no real solution. This kind of problem may happen for instance when a heavily stressed system is subject to a severe contingency situation. The set of control actions in the IP algorithm includes rescheduling of active power of generators, adjustments on terminal voltage of generators, tap changes on LTC transformers, and as a last resort, minimum load shedding [14].

Fuel Planning and Multi-reservoir management are some other areas where interior point methods have proven to be useful. A long-term fuel planning problem aims to minimize the sum of fuel purchase and yearly storage costs, subject to meeting the generation requirements, the constraints associatedwith fuel supply contracts, and the constraints associated with storage of fuel.[15]

Interior Point methods remain an active and fruitful area of research, although the frenetic pace that has characterized the area slowed down in recent years. Linear programming codes have become mainstream and continue to undergo development although they face stiff competition from the simplex method. Applications to quadratic programming show considerable promise, because of the superior ability of interior point approach to exploit problem structure efficiently. The influence on nonlinear programming theory and practice is yet to be determined even though substantial research has already been done on this topic [16]. An extensive evaluation of line search options was conducted by [17] and it was concluded that filter approach was the most robust approach. Many researchers are hopeful for the use of interior point approach in decomposition methods, though no rigorous comparative studies with alternative approaches have been performed.[18] Many authors have also worked on a special subclass of non smooth optimization problems and a new interior point method has been proposed for this class. These methods extend a standard interior-point method for nonlinear and nonconvex problems by additional line-search and step length computation features and a problem-tailored stationarity test. A special type of generalized gradients is developed that is used at points of the nonsmooth problems that fail to be differentiable.[19]