Lagrangean duality is a specific form of a broader concept known as Duality. The theory of duality originated as part of an intellectual debate and observation amongst mathematicians and colleagues John von Neumann and George Dantzig. During World War II, a discussion occurred where Dantzig shared his theory on Linear Programming and his simplex method. Von Neumann quickly surmised that Dantzig's Linear Programming shared an equivalence with his Game Theory and Expanding Economy model. Von Neumann then conceptualized the theory of using an alternate perspective, referred to as the dual problem, so that either the primal or dual problem could be solved to yield an optimal solution. In 1947, von Neumann formally published his theory of Duality. This principle would then see several formulations and implementations such as Fenchel, Wolfe, and Lagrangean.[1]

Generalization of a typical optimization problem:

The Lagrangean for the optimization problem above takes the form:

are the Lagrange Multipliers (dual variables).[4]

Let the dual variables be non-negative to ensure strong duality.

The Gradient of the Lagrangean is set equal to zero, to find the optimal values of

) equals the Lagrangean with

At the optimal values of variables

) yields the same solution as the primal problem, which is a function of the original variables (

). For the dual solution and the primal solutions to be equal the condition has to be a strong duality. The Lagrangean takes all of the constraints and combines it with the objective function into one larger formula. 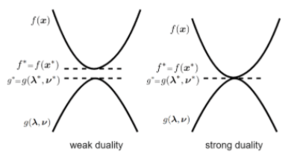 Illustration of weak and strong duality[6].

The verification of gaps is a convenient tool to check the optimality of solutions. As shown in the illustration, left, weak duality creates an optimality gap, while strong duality does not. Thus, the strong duality only holds true if the duality gap is equal to 0.

is the primal optimal and the

are the dual optimal. The equation shows that the duality gap is

Inf or infimum is the greatest element of a subset of a particular set is small or equal to all the elements of subset.

The inequality shows the

. It is possible to have other minimizers however in this instance

is the minimizer. This inequality follows as the Lagrangean infimum over

is less than or equal to

The last inequality shows that

One important takeaway is that

This is known as complementary slackness.

And the Complementary Slackness Conditions are:

Constructing the Lagrangean dual can be done in four easy steps:

Step 1: Construct the Lagrangean. The dual variables are non-negative to ensure strong duality.

Step 2: Take the partial derivatives (gradient) of the Lagrangean with respect to

, set each equal to zero, and solve for

terms into the Lagrangean to create the dual function (

), which is only a function of the dual variables (

Step 4: Construct the dual with the dual function (

) and the new constraints. The dual variables are non-negative.

In this section, we will apply the process to solve an example problem.

Construct the Lagrangean dual for the following optimization problem:

Let the dual variables be non-negative to ensure strong duality.

Step 2: Take the partial derivatives of the Lagrangean with respect to

, set each equal to zero, and solve for

terms into the Lagrangean to create the dual function (

), which is only a function of the dual variables (

Step 4: Construct the dual with the dual function (

) and the new constraints. The dual variables are non-negative.

The optimal solution to a dual problem is a vector of Karush-Kuhn-Tucker (KKT) multipliers (also known as Lagrange Multipliers or Dual Multipliers), thus the multipliers can be used for nonlinear programming problems to ensure the solution is indeed optimal. Since the Lagrange Multipliers can be used to ensure the optimal solution, Lagrangean duals can be applied to achieve many practical outcomes in optimization, such as determining the lower bounds for non-convex problems, simplifying the solutions of some convex problems meeting the conditions for strong duality, and determining the feasibility of a system of equations or inequalities[4]. The Lagrangean dual is used to compute the Support Vector Classifier (SVC) and effectively provides a lower bound on the objective function, which helps to characterize its solution.[10]

One application where the Lagrangean dual may be applied to find bounds for a complex problem is the symmetric Traveling Salesman Problem. This problem is analytically difficult, but its Lagrangean dual is a convex problem whose optimal solution provides a lower bound on solutions to the primal problem. While the solution to the dual problem may not be feasible in the primal problem, it is possible to use heuristic methods to find a primal solution based on the optimal dual solution[11].

Lagrangean duals have also proven useful in deep learning problems where the objective is to learn optimization problems constrained by hard physical laws. By incorporating duality during the training cycle, researchers can achieve improved results on a variety of problems, including optimizing power flows; optimizing gas compressor usage in natural gas pipelines; transprecision computing, in which the bit width of variables may be reduced to reduce power usage in embedded systems at the cost of increased error; and devising classifiers which are “fair” with respect to a defined protected characteristic[12].

The convex relaxation provided by the Lagrangean dual is also useful in the domains of machine learning[13]; combinatorial optimization, where it generalizes two well-known relaxation techniques in the field, max-stable and max-cut[14]; and 3D registration of geometric data in computer vision, where primal techniques often fail to escape local optima[15]. Lagrangean relaxation is a standard and efficient way to determine the optimal solution of NP-hard combinatorial problems.[16]

Overall, Lagrangean duality is a very useful way to solve complex optimization problems, since it is often an effective strategy for reducing the difficulty of finding the solution to the original problem. The process to find the Lagrangean dual is simple and can be implemented in a wide range of problems. Lagrangean duality is used in a variety of applications, including the traveling salesman problem, deep learning models, and computer vision.