AdaGrad is a family of sub-gradient algorithms for stochastic optimization. The algorithms belonging to that family are similar to second-order stochastic gradient descend with an approximation for the Hessian of the optimized function. AdaGrad's name comes from Adaptative Gradient. Intuitively, it adapts the learning rate for each feature depending on the estimated geometry of the problem; particularly, it tends to assign higher learning rates to infrequent features, which ensures that the parameter updates rely less on frequency and more on relevance.

AdaGrad was introduced by Duchi et al.[1] in a highly cited paper published in the Journal of machine learning research in 2011. It is arguably one of the most popular algorithms for machine learning (particularly for training deep neural networks) and it influenced the development of the Adam algorithm[2].

The objective of AdaGrad is to minimize the expected value of a stochastic objective function, with respect to a set of parameters, given a sequence of realizations of the function. As with other sub-gradient-based methods, it achieves so by updating the parameters in the opposite direction of the sub-gradients. While standard sub-gradient methods use update rules with step-sizes that ignore the information from the past observations, AdaGrad adapts the learning rate for each parameter individually using the sequence of gradient estimates.

: The outer product of all previous subgradients, given by

according to the following rule:

denotes the step-size often refered as learning rate or step-size. Expanding each term on the previous equation, the vector of parameters is updated as follows:

The general AdaGrad update rule is given by:

is the inverse of the square root of

. A simplified version of the update rule takes the diagonal elements of

instead of the whole matrix:

which can be computed in linear time. In practice, a small quantity

is added to each diagonal element in

to avoid singularity problems, the resulting update rule is given by:

denotes the identity matrix. An expanded form of the previous update is presented below,

denotes the Hadamard product between matrices of the same dimension, and

diagonal. From the last expression, it is clear that the update rule for AdaGrad adapts the step-size for each parameter

An estimate for the uncentered second moment of the objective function's gradient is given by the following expression:

which is similar to the definition of matrix

, used in AdaGrad's update rule. Noting that, AdaGrad adapts the learning rate for each parameter proportionally to the inverse of the gradient's variance for every parameter. This leads to the main advantages of AdaGrad:

which favor the convergence rate of the algorithm.

The general version of the AdaGrad algorithm is presented in the pseudocode below. The update step within the for loop can be modified with the version that uses the diagonal of

One main disadvantage of AdaGrad is that it can be sensitive to the initial conditions of the parameters; for instance, if the initial gradients are large, the learning rates will be low for the remaining training. Additionally, the unweighted accumulation of gradients in

happens from the beginning of training, so after some training steps, the learning rate could approach zero without arriving at good local optima [3]. Therefore, even with adaptative learning rates for each parameter, AdaGrad can be sensitive to the choice of global learning rate

. Some variants of AdaGrad have been proposed in the literature [3] [4] to overcome this and other problems, arguably the most popular one is AdaDelta.

AdaDelta is an algorithm based on AdaGrad that tackles the disadvantages mentioned before. Instead of accummulating the gradient in

over all time from

, AdaDelta takes an exponential weighted average of the following form:

is an hyperparameter, known as the decay rate, that controls the importance given to past observations of the squared gradient. Therefore, in contrast with AdaGrad, with AdaDelta the increase on

is under control. Typicall choices for the decay rate

are 0.95 or 0.90, which are the default choices for the AdaDelta optimizer in TensorFlow[5] and PyTorch[6], respectively.

Additionally, in AdaDelta the squared updates are accumulated with a running average with parameter

so the update rule in AdaDelta is given by:

RMSprop is identical to AdaDelta without the running average for the parameter updates. Therefore, the update rule for this algorithm is the same as AdaGrad with

calculated as done for AdaDelta (

The regret is defined as:

is the set of optimal parameters. AdaGrad has a regret bound of order

, which leads to the convergence rate of order

, and the convergence guarantee (

). The detailed proof and assumptions for this bound can be found in the original journal paper[1]. However, with some modifications to the original AdaGrad algorithm, SC-AdaGrad[4] shows a logarithmic regret bound (

of the gradient vectors, AdaGrad has a regret bound of order

. Nevertheless, for the special case when gradient vectors are sparse, AdaGrad has a regret of an order

[1]. Therefore, when gradient vectors are sparse, AdaGrad's regret bound can be exponentially better than SGD (which has a regret bound equal to

Comparison with Other Gradient-based Methods

AdaGrad is an improved version of regular SGD; it includes second-order information in the parameter updates and provides adaptative learning rates for each parameter. However, it doesn't incorporate momentum, which could improve convergence rates. An algorithm closely related to AdaGrad that incorporates momentum is Adam.

so, in comparison with AdaGrad, SGD doesn't have an independent learning rate for each parameter and doesn't include second-order information from the accumulation of square gradients in 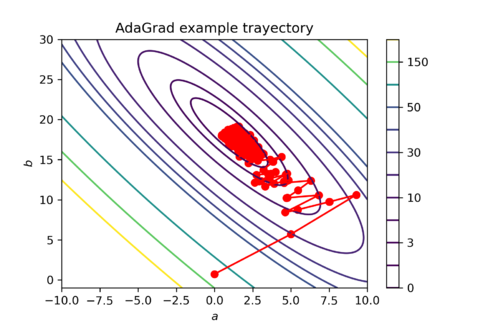 Figure 1. This figure shows a trajectory of parameter updates for the example presented in this section using AdaGrad.

To illustrate how the parameter updates work in AdaGrad take the following numerical example. The dataset consists of random generated obsevations

is random noise. The first 5 obsevations are shown in the table below.

. And an observation of the cost function at time step

are sampled from the obsevations. Finally, the subgradient is determined by:

. For the first iteration of AdaGrad the subgradient is equal to:

So the first parameter's update is calculated as follows:

. An example AdaGrad update trajectory for this example is presented in Figure 1. Note that in Figure 1, the algorithm converges to a region close to

, which are the set of parameters that originated the obsevations in this example.

The AdaGrad family of algorithms is typically used in machine learning applications. Mainly, it is a good choice for deep learning models with sparse gradients[1], like recurrent neural networks and transformer models for natural language processing. However, one can apply it to any optimization problem with a differentiable cost function.

Given its popularity and proven performance, different versions of AdaGrad are implemented in the leading deep learning frameworks like TensorFlow and PyTorch. Nevertheless, in practice, AdaGrad tends to be substituted by using the Adam algorithm; since, for a given choice of hyperparameters, Adam is equivalent to AdaGrad [2].

Natural language processing (NLP) is an area of research concerned with the interactions between computers and human language. Multiple tasks fall within the giant umbrella of NLP, such as sentiment analysis, automatic summarization, machine translation, and text completion. Deep learning models, like recurrent neural networks and transformer models[8], are the usual choices for these tasks, and one common issue faced when training is sparse gradients. Therefore, AdaGrad and Adam work better than standard SGD for that settings.

AdaGrad is a family of algorithms for stochastic optimization that uses a Hessian approximation of the cost function for the update rule. It uses that information to adapt different learning rates for the parameters associated with each feature. Their main two advantages are that: it assigns more significant learning rates to parameters related to low-frequency features, and the updates in directions of high curvature tend to be lower than those in low-curvature directions. Therefore, it works especially well for problems where the input features are sparse. AdaGrad is reasonably popular in the machine learning community, and it is implemented in the primary deep learning frameworks. In practice, the Adam algorithm is usually preferred over AdaGrad since, for a given choice of hyperparameters, Adam is equivalent to AdaGrad.