Line search method is an iterative approach to find a local minimum of a multidimensional nonlinear function using the function's gradients. It computes a search direction and then finds an acceptable step length that satisfies certain standard conditions. [1] Line search method can be categorized into exact and inexact methods. The exact method, as in the name, aims to find the exact minimizer at each iteration; while the inexact method computes step lengths to satisfy conditions including Wolfe and Goldstein conditions. Line search and trust-region methods are two fundamental strategies for locating the new iterate given the current point. With the ability to solve the unconstrained optimization problem, line search is widely used in many cases including machine learning, game theory and other fields.

The direction of the line search should be chosen to make

, and it is usually related to the gradient

. The most obvious direction is the

because it is the one to make

decreases most rapidly. This claim can be verified by Taylor's theorem:

The rate of change in

is the coefficient of

of most rapid decrease is the solution to

is the solution and this direction is orthogonal to the contours of the function. In the following sections, this will be used as the default direction of the line search.

The step length is a non-negative value such that

. When choosing the step length

, there is a trade off between giving a substantial reduction of

and not spending too much time finding the solution. If

and more detail about these approaches will be introduced in the next section.

For a line search algorithm to be reliable, it should be globally convergent, that is the gradient norms,

, should converge to zero with each iteration, i.e.,

It can be shown from Zoutendijk's theorem [1] that if the line search algorithm satisfies (weak) Wolfe's conditions (similar results also hold for strong Wolfe and Goldstein conditions) and has a search direction that makes an angle with the steepest descent direction that is bounded away from 90°, the algorithm is globally convergent.

Zoutendijk's theorem states that, given an iteration where

is the descent direction and

is the step length that satisfies (weak) Wolfe conditions, if the objective

is bounded below on

and is continuously differentiable in an open set

is the starting point of the iteration, and the gradient

is Lipschitz continuous on

is the angle between

and the steepest descent direction

The Zoutendijk condition above implies that

by the n-th term divergence test. Hence, if the algorithm chooses a search direction that is bounded away from 90° relative to the gradient, i.e., given

However, the Zoutendijk condition doesn't guarantee convergence to a local minimum but only stationary points. Hence, additional conditions on the search direction is necessary, such as finding a direction of negative curvature whenever possible, to avoid converging to a nonminimizing stationary point.

Given the intuition that the negative gradient

can be an effective search direction, steepest descent follows the idea and establishes a systematic method for minimizing the objective function. Setting

as the direction, steepest descent computes the step-length

by minimizing a single-variable objective function. More specifically, the steps of Steepest Descent Method are as follows: 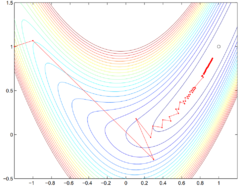 Figure 1. Steepest descent does not produce convergence on the Rosenbrock function. [4]

Let the gradient of

be uniformly Lipschitz continuous on

. Then, for the iterates with steepest-descent search directions, one of the following situations occurs:

However, steepest descent has disadvantages in that the convergence is always slow and numerically may be not convergent (see Figure 1.)

Steepest descent method is a special case of gradient descent in that the step-length is analytically defined. However, step-lengths cannot always be computed analytically; in this case, inexact methods can be used to optimize

While minimizing an objective function using numeric methods, in each iteration, the updated objective is

, which is a function of

after fixing the search direction. The goal is to minimize this objective with respect to

. However, if one wants to solve for the exact minimum in each iteration, it could be computationally expensive and the algorithm will be time-consuming. Therefore, in practice, it is easier solve the subproblem

instead, which will decrease the objective function. That is,

. However, convergence to the function's minimum cannot be guaranteed, so Wolfe or Goldstein conditions need to be applied when searching for an acceptable step length. [1]

This condition is proposed by Phillip Wolfe in 1969. [5] It provide an efficient way of choosing a step length that decreases the objective function sufficiently. It consists of two conditions: Armijo (sufficient decrease) condition and the curvature condition. 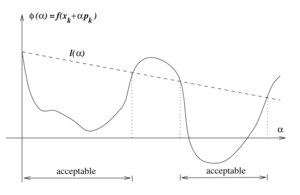 . This condition ensures the computed step length can sufficiently decrease the objective function

. Only using this condition, however, it cannot be guaranteed that

will converge in a reasonable number of iterations, since Armijo condition is always satisfied with step length being small enough. Therefore, the second condition below needs to be paired with the sufficient decrease condition to keep

from being too short. 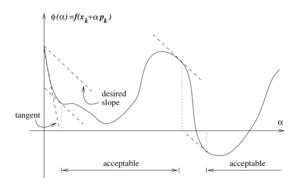 is much greater than

and is typically on the order of

. This condition ensures a sufficient increase of the gradient.

to be in the vicinity of a stationary point of

The (weak) Wolfe conditions can result in an

value that is not close to the minimizer of

The strong Wolfe curvature condition restricts the slope of

from getting too positive, hence excluding points far away from the stationary point of 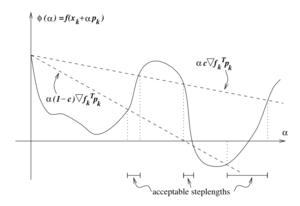 Another condition to find an appropriate step length is called Goldstein conditions:

. The Goldstein condition is quite similar with the Wolfe condition in that, its second inequality ensures that the step length

will decrease the objective function sufficiently and its first inequality keep

from being too short. In comparison with Wolfe condition, one disadvantage of Goldstein condition is that the first inequality of the condition might exclude all minimizers of

function. However, usually it is not a fatal problem as long as the objective decreases in the direction of convergence. As a short conclusion, the Goldstein and Wolfe conditions have quite similar convergence theories. Compared to the Wolfe conditions, the Goldstein conditions are often used in Newton-type methods but are not well-suited for quasi-Newton methods that maintain a positive definite Hessian approximation.

The backtracking method is often used to find the appropriate step length and terminate line search based. The backtracking method starts with a relatively large initial step length (e.g., 1 for Newton method), then iteratively shrinking it by a contraction factor until the Armijo (sufficient decrease) condition is satisfied. The advantage of this approach is that the curvature condition needs not be considered, and the step length found at each line search iterate is ensured to be short enough to satisfy sufficient decrease but large enough to still allow the algorithm to make reasonable progress towards convergence.

, and it is roughly as follows:

As an example, we can use line search method to solve the following unconstrained optimization problem:

Taking partial derivative of the above equation with respect to

and set it to zero to find the minimizer

At this point, we find

Check to see if the convergence is sufficient by evaluating

is relatively small and is close enough to zero, the line search is complete.

The derived optimal solution is

, and the optimal objective value is found to be

A common application of line search method is in minimizing the loss function in training machine learning models. For example, when training a classification model with logistic regression, gradient descent algorithm (GD), which is a classic method of line search, can be used to minimize the logistic loss and compute the coefficients by iteration till the loss function reaches converges to a local minimum. [6] An alternative of gradient descent in machine learning domain is stochastic gradient descent (SGD). The difference is on computation expense that instead of using all training set to compute the descent, SGD simply sample one data point to compute the descent. The application of SGD reduces the computation costs greatly in large dataset compared to gradient descent.

Line Search is a useful strategy to solve unconstrained optimization problems. The success of the line search algorithm depends on careful consideration of the choice of both the direction

and the step size

.This page has introduced the basic algorithm firstly, and then includes the exact search and inexact search. The exact search contains the steepest descent, and the inexact search covers the Wolfe and Goldstein conditions, backtracking, and Zoutendijk's theorem. More approaches to solve unconstrained optimization problems can be found in trust-region methods, conjugate gradient methods, Newton's method and Quasi-Newton method.